Track by track comments for: Helvete

- I wanted to write a song with a very quick intro that would suit following a song with a slow, maybe fading, ending. But it ended up as the opening track, following the formula set on "Inhale/Exhale" and "Human 2.0" - start with a short fast track. The lyrics are about animals.

- When we wrote "Scoop" it was completely different. The verses had an Entombedish groove and the arrangement was different. That version of "Scoop" wasn't going anywhere and I told Mieszko that we had to do something about the verses. It was rewritten and ended up as one of the best Nasum tracks of all time. The closing rhythmic part was an homage to our friends in Nostromo, but was by some seen as a "nu metal part"... Yikes!

3. Living Next Door To Malice

- This is one of the earliest songs written for "Helvete". We originally planed to record our third album during the fall of 2001 but that didn't suit Relapse's schedule and after that we got a little crises in the band that made us postpone the recording even further. This song and a few more were written early 2001. I knew this song very well and fact is that I recorded the drums without any supporting guitar at all. It was on the last day of recording drums and I had this and maybe some other song left to record and I was exhausted and didn't nail the song during the takes. Mieszko had to leave to go to a store before it closed and I stayed to practise the song. As I practised it I felt that I probably could record it by just thinking the riffs. So I started the digital recording and did it.
A true "drummer's song" in every sense. The lyrics dealt with right wing/racist opinions growing in the country next door to Sweden - Denmark.

- A fantastic, epic song that was mainly written through improvisation, although that wasn't the method we usually used to write songs. I remember how the song took a shape in the rehearsal room and how I longed to hear it recorded. Old member Rickard Alriksson does a brilliant job with the ultra dark and deep vocals towards the end. A fantastic song indeed!

- Another "drummer's song"... I took a lot of inspiration from His Hero Is Gone/Tragedy concerning the structure of the song, not so much the riffs. The trademark Nasum drop-A tuning really worked in this song since the opening part included weird chords with lots of harmonies. Lyrics are about my favorite subject: people not thinking or doing anything, but finally finds their path in life.

- Another one of those short to the point songs. It's quite aggressive and very groovy towards the end. The crust riff was kind of weird and I know Urban had a hard time understanding it. A live favorite.

- Musically reminiscent of "When Science Fails" (from "Inhale/Exhale") and "The Professional League" (from "Human 2.0"), the lyrics deal with the situation in Israel, a subject that Mieszko was very interested in. I like the pace of this song in the pre-chorus - it really pushes the song forward. The sample is from a very underated movie called "Killing Zoe".

- The lyrics may not feel that exciting compaired to the others on "Helvete", but they were meant as an "easy" counterpart to the more advanced lyrics. It's just fun to be really obvious sometimes and shit on the easy targets. The song is quite funny and quite fast and the closing part is really odd. I like it! Jesper sings the dark parts.

- One of many anti-Bush songs on the album. Rickard does those deep "Doooooooom" in the choruses. The slow, atmospheric part towards the end was recorded without the drums. The drums for this part was recorded much later with a different set up of mikes to get a room reverb. I believe there was some kind of compression on the drums as well adding that "schup schup" sound, which I actually managed to reproduce live by opening and closing the hi hat. A personal favorite on the album.

- Dubbed "Carcass/Metallica" during the writing process (intro = totally Carcass, verse = kind of "Battery" inspired) the lyrics came together from two different directions. My old favorite TV show "LA Law" was rerunning on TV and in one episode one guy bursted out something that I rewrote as: "All that massive power / You’re just another hog / Sucking up to the master / While feeding from the trough". As I was working with the song to find a good rhythm for the vocals I needed something to sing and had Slayer's "South of Heaven" in front of me and sung the lyrics to my riffs. "Ghosts of War" was used for this track. In fact, you can sing the lines "I deal in pain / All life I drain /
I dominate /( I seal) your fate" in the chorus to "Just Another Hog". I even kept "(They) dominate your fate" because it sounded so cool.

- It's pretty obvious that this song is called "Drop Dead" since it's very much like a Drop Dead song. I think there's a drumbreak at the end that is pretty much like the breaks in the "Bullshit Tradition" song that we covered and often played live.

- The title is a bit provocative, since the complete line is "I hate people telling me what to do", but that was the intention. I remember this as a very hard song to play. The verses were much longer originally, but we did some good old Nasum downsizing, but it was still a little bit of a pain to play. After a while we started playing this song in a really slow version on soundchecks etc and we even recorded it as "I Hate People (Slowly)" during the "Shift" session, but never finished it as Mieszko found it terrible hard to sing in the new tempo.

- Lots of grindparts in this song, almost the entire song, which is cool. The snare thing in the begining was recorded seperately late in the whole recording process. There was another snare thing first but I wasn't satisfied with it and while we were recording some extra drums we did this roll which added some more speed to the whole song. Lyrics were an attempt to write some positive lyrics for a change. It was hard - it's easier to whine.

- This song came as a surprise to many listeners. It wasn't what they expected on a Nasum album. I think it was a nice break on the album. Lots of overdubs in the middle of the song. Mieszko went wild in the studio. We tried to play this song live a couple of times but never really got it right, probably due to all the overdubs that were impossible to perform even with a two guitar line up.

- I know it's a little bit cheesy to write a song about yourself, but I found it neccessary as a follow up to the crises I meantioned earlier. Both "Inhale/Exhale" and "Human 2.0" had gotten great reviews so it was some pressure on us to come up with something better. Musically this song has a quite weird verse and I had trouble coming up with a good vocal rhythm, but Mieszko did his own version and succeded much better than I.

- Jesper wrote his first couple of Nasum songs on the 7" EP's preceeding "Helvete" but I think he found his writing style on the tracks he wrote for the album. Jesper is a sucker for harmonies and I think he really enjoyed writing songs in the drop-A tuning. This song has lots of harmonies and parts that Mieszko and I never would have come up with. The more songwriters the better the overall sound is my opinion.

- During the recording process you must take every chance you get to finish lyrics and so on, and I wrote parts of the lyrics to "The Everlasting Shame" while I was attending a show and was waiting for the band to start. I sat at a table, thinking the riffs as the dj played some crappy shit. But when you're in the zone you just write. This is a feminist song, something I care a lot about. I remember Jesper complaining about the last line in my original lyrics so I changed it. I was kind of bugged by his criticism, but in hindsight I don't regret the change. Killer intro with the grinding bass.

- The original title for this song was the last line of the lyrics: "Shock Treatment of the Masses" but Mieszko felt it was too complicated. He always wanted the titles to be as easy as possible, while I prefered witty and long ones... Hehe! This song was a little tricky to play. Lots of short parts, but it turned out great.

- War - not the most exciting thing you can write about, but I felt it was interesting to write from a soldiers point of view. Maybe I picked inspiration from "Band of Brothers"? The sample comes from "Forrest Gump" though. I like the last part of the lyrics ("There was blood...") which has a poetic twist. It's a pretty cool song with a nice heavy part in the middle, which became even nicer when we recorded the second guitar and came up with the harmonies.

- To hear Jörgen sing "The old beast awakened again" in his massive voice is one of my personal highlights on "Helvete", and I guess it's a personal highlight in life (!) for Jesper to have "Jörgen from Grave" singing on a song he wrote! Another quite typical Jesper song with lots of parts that is very different from Mieszko's and my songwriting.

- When it was confirmed that Shane Embury would appear on the album we more or less wrote this song for him. It's got a Napalm Death highspeed mosh feeling in the beginning (and you can hear Shane's bassplaying!) and some other Napalm Death connections (like the line "Enslavement, obliteration" appearing in the lyrics). Having Shane playing on the album was a weird idea coming true and I am happy to have had him playing on songs that I have created.

- Another closing song written by me. I love the weird ending of this song which is slow rather than heavy. It felt very strange and cool at the same time to play it and we felt quite early that it should be the last song on the album. We recorded the last parts of the song (the slow ones) to a click track and changed the tempo to be even slower on the very last part for a nice effect. The song originally had a Smashing Pumpkins type of intro with lots of toms and in the studio we recorded an intro to the intro which had lots of free form drum shit. It was a cool idea, but in the end we had to scrap both intros. We did however use the original intros when we played this song on the tour in Finland 2003 but scrapped them for good after that. It wasn't meant to be. The sample comes from the "LA Law" show mentioned earlier.

- A funny thing is that the track "Helvete" was the first song from the "Helvete" session that we played live before we recorded the album. We played it twice in Stockholm and Örebro in October 2002. At that time the track hadn't got a title or any lyrics, and it still hasn't. The lyrics are screams from Mieszko mixed with Jörgen lines from the Napalm Death cover "Unchallanged Hate" which we recorded at the same time. Cut and paste lyrics and vocals for sure! 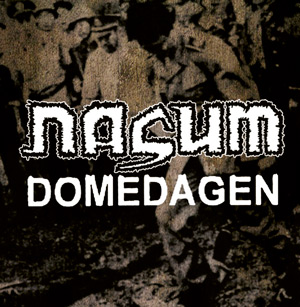