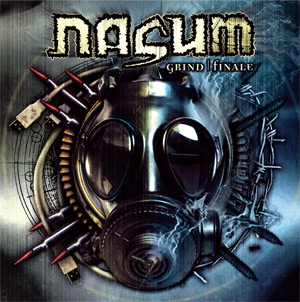 About the compiling and mastering...

"Grind Finale" was a work in progress for such a long time, and by the end of 2004 Mieszko and I was supposed to finish it once and for all. Unfortunately we didn't have the time to do it before Mieszko left for Thailand, and then... well, you know what happened.

In March of 2005 I started to work on compiling the collection. I asked Dan Swanö to help me with it and he came in installed some software in my computer and encouraged me to do it myself. We went to Soundlab to transfer the original sound files from their computer and basically started from scratch. Swanö held a short crash course in what to do with the stuff to first and foremost get an even sound through out the compilation. Although "Grind Finale" covers 15 recording sessions, there were more than 15 sources for the material.

Once I got a hang of what to do, the work was done without any major problems. I did a lot of mixes and listened to them in different stereos and such until I felt that I was done. Swanö then did some final adjustments increasing the output volume among other things.

Doing all this work became a way for me to handle my grief. I was totally focused on Nasum and it made me appreciate everything that Mieszko and I - and all our fellow Nasum members over the years - had accomplished, and it was something more than a simple trip down memory lane.

This collection has had a lot of different titles during the years. At one point, maybe the first suggestion, we wanted to call it "Recycling Rules Supreme", a political statement and also a funny title since we recycled old recordings. Then we progressed to "Grind Your Mind" which was a phrase we put on our "Human 2.0" t-shirts (paraphrasing Release's "Release Your Mind" t-shirt), that people seemed to like a lot.

When Relapse tried to get the ball rolling early 2001, employee Andy Hozner was set on the case and suggested the title "Blueprint for Extinction" as the title for the compilation. After some consideration we thought it was a great title and went for it. But when Mieszko passed away I felt that the word "extinction" made the whole title very inappropriate and started to think of something new. I had totally forgotten about the first two suggestions and started to think of a play on words with "Grind" somewhere in there, and ended up with "Grind Finale" which was perfect since it would be the final (bigger) release from Nasum.

About the cover and packaging...

Since the compilation has had a lot of different title ideas there has been as many ideas for the cover and as many artists involved in the process. When the new and final title was decided, I decided to let Relapse's in-house art department do it all, which was a wise decision since everything went very smoothly during the creative process.

A general idea that has been going through all the phases was to use artwork elements from the releases covered in the compilation as an inspiration, and I think Orion Landau who did the front cover got it pretty well.

To find a suiting packaging for the release was a struggle of its own. I knew that a normal packaging wouldn't do it because of all the text I had gathered. There were detailed information and comments and lyrics for 152 songs, and then lots of artwork and photos. I had an idea of having a normal 2xCD jewel case with a separate booklet and then a slipcase to put it all together. Relapse were looking at DVD digipak options, before they suggested the hardcover digipak. I thought it was great because I had a Tool box with the same sort of packaging.

Once it was time to print it, the printing firm did the booklet on Bible page thin stock and once assembled the booklet was way to thin for the rest of the package. This led to another delay, one of many, as you can read in the timeline below.

Eventually Relapse did a second edition in a normal jewelcase packaging with a slightly re-layed out booklet. Some of the artwork and photos had to go but all the text was in the new booklet. They managed to do it, but the look isn't as elegant as the original booklet.

At first I was reluctant to do a vinyl version as most of the material on "Grind Finale" came from vinyl releases from the beginning, but as I was approached by Unrest Records from Canada it suddenly became more interesting. We discussed a few ways to transform the 2xCD to vinyl and to get the best result a 4xLP was my suggestion.

Unrest went "all-in" when it came to packaging and came up with something that really matched the hardcover digipak CD. Both releases has the same sort of feeling, i.e. something more than just a compilation of songs. In the end "Grind Finale" - the vinyl version became a monster of a release, bringing lots of "weight" to the project.

Years later, when Nasum did the farewell tour, a repress of the 4xLP was planned, but ultimately it was released after the tour. The repress had brand new artwork for the slipcase and the 2x2 feet poster. The innersleeves all had gold foilage on the logo side - the first press had different colors - and the pages in the booklet were assembled in the correct order, which wasn't the case with the first press.

Additionally, the repress was on colored vinyl - red (side A/B), bronze (side C/D), silver (side E/F) and gold (side G/H). The edition was issued in 1000 copies where 200 had additional black splatter in the vinyl.

"Grind Finale" was a project that was a work in progress for many, many years until it finally saw the light of day. Unfortunately not a problem free project, as you can see in the following timeline which covers six years...

• February 27 - Andy Hozner of Relapse starts nagging about the collection.
• Early March - Nasum talkes to "Human 2.0" artist Robert Ahlborg about doing the artwork.
• March 28 - First draft of the musical content. Second title suggestion: "Grind Your Mind".
• April 23 - Robert withdraws from the artwork duties.
• May 1 - Changes the title to "Blueprints for Extinction", originally suggested by then Relapse employee Andy Hozner.
• June 13 - First email conversation with Jonathan Canady regarding the artwork.
• August 30 - First email conversation with Paul Romano who has been asked to work with the artwork. Paul sends a few sketches.
• September 18 - All original DAT-tapes has been called back from different sources, stuff ready to be sent to the mastering firm Digitalfabriken.
• Early November - First suggestions for artwork from Paul Romano. Not exactly what Nasum wanted, but artwork is (against Nasum's wish) used in the "Contamination 5.0" CD.
• December 15 - First draft of the liner notes
• December 17 - Scheduled day for mastering. Doesn't happen.

• August 29 - Nasum decides to postpone "Blueprints for Extinction" until 2003 to concentrate on writing, recording and releasing "Helvete".

• Late February - Two sessions are transfered from vinyl to CD. The guy who does it takes forever to ship the CD to us.
• December 9 - Relapse art department takes over the project.
• December 15 - Jonathan Canady from Relapse's art department gives his view of the artwork status.
• Late December - A date is planed to finish the mastering in Soundlab. Doesn't happen.
• December 26 - Mieszko Talarczyk dies in the Tsunami Disaster.

• Early March - Anders starts working seriously with finishing the collection. Decides to change the title to "Grind Finale". Has grand plans to include rehearsal songs and live takes and maybe a DVD.
• March 15 - Anders visits Soundlab Studios to locate all the source material in Soundlab's computer. Kills the plans for rehearsal and live stuff and the DVD.
• March 30 - Albert Mudrian is asked to write a foreword to "Grind Finale". Replies: "I would be honored to write the foreword".
• April 1 - All songs are transfered from Soundlab Studios's computer with the help of Dan Swanö.
• April 9 - Dan Swanö teaches Anders how to use Cubase to master the songs.
• May 1 - Anders sends introduction, details and linernotes to Glenn Sykes (Regurgitate) for proofreading. Recieves lots of corrections the same day.
• May 7 - New email conversation with Jonathan Canady regarding the artwork.
• May 13 - Anders submits introduction, details and linernotes, and lyrics for the booklet.
• May 16 - Masters are sent to Relapse.
• June 1 - Albert submits first draft of the foreword, entitled "Grindcore 2.0: A Nasum Eulogy".
• June 2 - Jonathan sends pictures of Tool's "Salival" boxset as a packaging suggestion for "Grind Finale".
• June 3 - Albert submits final draft of the foreword.
• June 27 - First suggestion for the front cover by Orion Landau. Needs a little more work.
• July 21 - Relapse says US release date for "Grind Finale" is October 25.
• July 25 - The front cover is finished!
• August 5 - First suggestion for the booklet by Jonathan Canady. Is OK'ed at once.
• August 25 - The artwork is finally completely done. Both Anders and Jonathan feel bad that the project is over.
• Late September/Early October - Relapse Japan translates all linernotes, comments and lyrics for "Grind Finale".
• Early October - Relapse announces a new release date as of November 11 (US) and 21 (Europe) due to "Catastrophic level of problems with the printing".
• October 20 - Printer send sample booklet to Relapse. Another fuck up, Relapse says: "They had printed the entire 80 page booklet on the wrong paper stock, which is super thin, and makes the book only about half the size it should be. As a result, the spine would have been way bigger than the booklet, and the whole thing just would have looked bad, as it would have been incorrect." The whole stock needs to be reprinted and since other releases are planed, Relapse sets the new release dates as of January 24 (US) and 30 (Europe).
• November 23 - The final album is in Relapse's hands.
• November 25 - Anders gets the first copies of "Grind Finale".
• December 26 - A copy of "Grind Finale" is placed at Mieszko's grave.