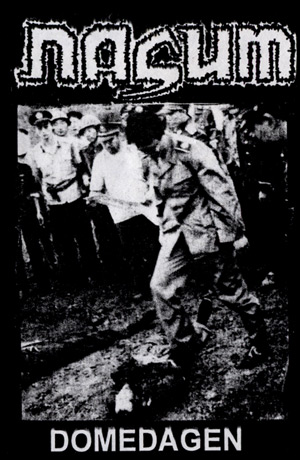 Released by:
• Self released
• Power-It-Up, Germany

We recorded the “Domedagen” demo in an old studio outside of Örebro. I guess the studio was built in the 70’s, because it had that kind of vibe and I’m sure the studio could have been really great if the right people were behind the desk. Obviously, we recorded our demo with the wrong people.

Mieszko was back in school learning how to be a studio engineer and “Domedagen” was recorded with a couple of his fellow students who really had no clue what we, or they for that matter, were doing. I remember Mieszko sound checking my guitar – EMG-81 pick-ups through a Boss DS-1 distortion pedal and a Peavey bass amp – and I asked the guys to crank up the bass even more, although it was way too much bass. They couldn’t tell if I was joking or not. Another funny anecdote is when they stopped the tape after the fifth song or so and asked us when we were going to “start playing for real!”

The stuff on “Domedagen” was pretty much rushed, I think that most of my songs suck really badly and the best stuff was re-recorded for the “Industrislaven” MCD. Regurgitate had released a demo after a couple of EP's and we were sort of inspired by them to do a demo for the sake of it. It sort of shows, and I guess one of the reasons we did it was because we could record it for free.

It was, however, fun to record a few cover songs for the first time. The Napalm Death track came from a legendary split 7" flexi with S.O.B. that eventually will show up again in the comments for another release...

Also the demo includes a few songs in Swedish. It felt right to write in Swedish, which would be even more evident on the following recording.

Mieszko designed the cover and "front" part of the sleeve, which I did the "back" with the lyrics. Not much to say, it's punk!

Power-It-Up Records in Germany came up with the idea of a vinyl reissue in connection with Record Store Day 2014, in part to celebrate the 20th anniversary of the original demo. We liked the idea - although "Domedagen" once was a tape and now is a part of "Grind Finale", it has never been a record of its own, and a 7" EP sounded like a cool idea. The artwork was reworked from the original design and to make release more "punk", all texts were hand written by Anders Jakobson.

Additionally, a small edition on cassette, limited to 100 copies, was also released.

Previous:
"Smile When You're Dead" Split 7" EP with Psycho
Next:
"Industrislaven" MCD/12" EP