DETAILED DISCOGRAPHY:
Requiems of Revulsion - A Tribute to Carcass 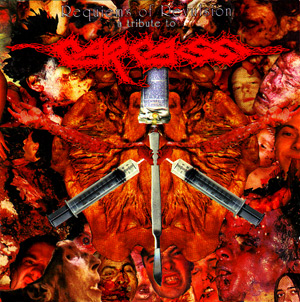 1. Tools of the Trade (originally by Carcass)

Even though it might not be that obvious, Carcass was a huge source of inspiration for Nasum. Many of our songs have had working titles related to Carcass. When Matt of Exhumed asked us to be part of the “Requiems of Revulsion” tribute to Carcass we didn’t hesitate.

We picked “Tools of the Trade” because it was pretty easy to transfer to our style with the dual vocals and everything. I changed the double bass part to be a bit groovier because I couldn’t play double bass that good. Also, "Tools of the Trade" felt like an odd number in the Carcass catalogue, which would make our choice stand out on the tribute.

Although Jesper was a full time member in Nasum at this point he didn't play on "Tools of the Trade”. He was away, way up north in Norway working in the docks. Yes, it might sound like a made up story, but he was actually eviscerating fish for a couple of months and couldn’t just leave to record one song. We felt kinda bad doing it without him but he was OK with it.

So Mieszko and I did it just the two of us. It was the last song that I sang on. I can’t say that I’m pleased with how my vocals came out this last time, but I never was good at it anyway. The stunning guitar solo was performed by a local friend, Petter Freed, who also did some solo work on some album songs. Mieszko and his studio partner in crime, Mathias, added the drills and powertools in the mix as a little surprise for the rest of us.

1. Tools of the Trade (originally by Carcass)