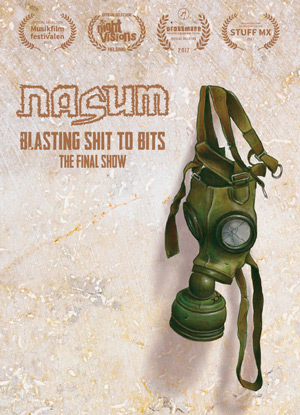 During the Farewell tour we met the Danish filmmaker Michael Panduro when he asked to film us in a different way during our show at the Roskilde festival. Michael and his crew filmed us with a number of cameras, some mounted in weird places, and the edited result was really cool. It had an intimate feeling that made it a very different concert documentation. However, that particular show wasn't really that good. It was shot in daylight on the last day of a long festival weekend. It kind of lacked some energy.

We kept in touch with Michael and met him at a later date where we decided to shot the final show in the same way. Michael had the idea of incorporating audience shot footage in the final version as well to make it even more intimate. Michael and his crew tagged along on the last two dates of the tour and shot some behind the scenes kind of stuff too.

After the final show, Michael started assembling all the stuff and it took quite a while. About four years after the actual show, an edited version of the entire concert was finished. Michael did some retrospective interviews with all the members of the band and placed them between the songs, thus transforming a live video to a concert movie. We decided to call it "Blasting Shit to Bits - The Final Show" after a phrase from the original farewell statement, and in 2017 the finished movie had it's premiere at Musikfilm festivalen in Copenhagen, Denmark.

We had screenings at some other festivals during a few years until we decided that a physical release was needed. Michael had assembled some bonus material and we put together a really good release that gave value for the money. The DVD was released by the end of 2020 by Selfmadegod Records, Poland.

During the festival years we had used Mike Wohlberg's design as the poster. It was originally a poster for the Philadelphia show on the tour and was later used as an official tour t-shirt during the final European leg of the tour. It felt natural to use it for the DVD, but we added a slipcase with art by Lisbet Fredslund based upon an idea from Michael Panduro. It's very cool and fits the theme of the final show.

Previous:
"SOS Japan - Grind Kaijyu Attack!" Split 12" picture disc with Napalm Death
Next:
There are no more releases in the discography