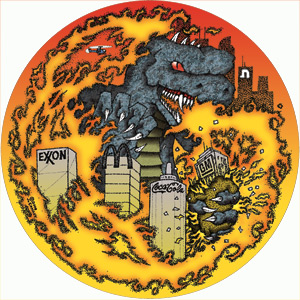 After bonding with Napalm Death on the seven week long European tour in 2000, we became friends for life. There was talk about doing a split for many years, with one exciting idea floating around where we should trade one cover with each other. During the "Helvete" session we recorded "Unchallanged Hate" and had a few extra songs that would be our part of the split. But that never happened.

During our second tour together, a short round in Japan, we picked up the discussions about doing a live split instead. The idea kept going for many, many years, actually for such a long time that I never thought it would happen, but then it did. Shane Embury released it as a split 12" picture disc on his own label F.E.T.O.

One idea that was discussed during the tour in Japan was to have a Japanese monster movie sort of artwork with two huge monsters fighting each other, one representing Nasum and the other Napalm Death.

But then Napalm Death got this great drawing of themselves that they used and I was without some proper artwork. I still liked the moster movie idea and talked to Jonathan Canady who did the layout for "Grind Finale" and ordered a image from him. He drew in the same style as Jeff Walked did Napalm Death's "Scum", even incorporating the same corporate logos in the image. A sort of tribute to Napalm Death and the original artwork idea.