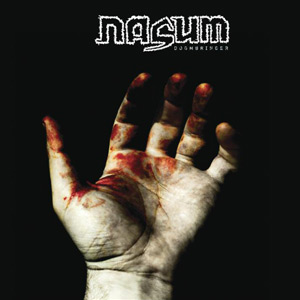 This live recording from Japan was always intended to be a split with Napalm Death, but that release got delayed and then more delayed. I sort of gave up on the idea and talked to Relapse about doing a Nasum only release on CD.

But then the split was on again and the idea was to release the split on vinyl first and then do the CD a couple of months later. In the end both versions were released, but the CD and a LP version was released before the split.

About the title and artwork...

When I was about to discuss artwork ideas with Orion Landau from Relapse I hadn't decided on a title yet. I was thinking about "Doombringer" and "The Masked Face" and asked Orion which one got him most excited as an artist. He called "Doombringer" "the winner" and thus the title was set. Orion immediate presented an idea for the artwork was very different from what it ultimately became. I'm happy with the outcome and it's quite different from the other Nasum releases.