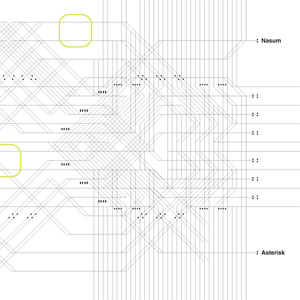 No less than three Swedish hardcore labels got together to release this split 7" EP with fellow Swedish grinders Asterisk*. The more the merrier...

This recording is interesting because it’s the first where Jesper stepped in as a song writer in Nasum and as the low grunter. I had put my singing days to rest, although I had one final appearance left. Jesper's song - "In Praise of Folly" - is really cool. I knew what to expect out of Mieszko's song writing, so it was refreshing and fun to hear a new "voice" in Nasum.

My two songs are a bit weird but cool. "Krossa" is super fast and aggressive and have this weird quick backbeat with a twist during the verses which is a interesting alternative to more traditional fast beats. It sounds chaotic and groovy at the same time. There's something weird happening in the second verse when I start to blast which made us change the vocal rhythm and add some words to correct it.

I guess it also is appropriate to say that the intro and outro for "Falska Tankar" is my way of showing my appreciation to one of the best Swedish bands of all time – Breach. Something nice and heavy surrounding another aggressive song.

I decided to write my lyrics in Swedish this time and if I remember correctly I wrote most of the words during a long train trip. Both the lyrics and the songs are loaded with aggression. I was really pissed off at certain people at that time, and it was nice to use the songs as a funnel for all that aggression.

Previous:
"The Bloodbath is Coming" Compilation 2x7" EP
Next:
"Requiems of Revulsion - A Tribute to Carcass" Compilation CD