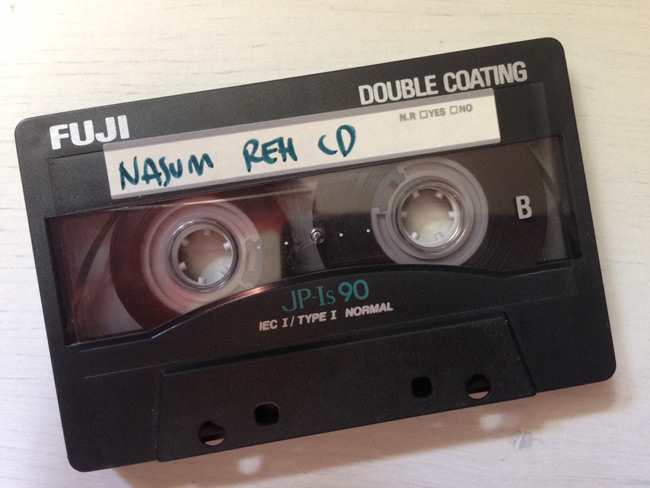 A few years ago I found a tape in one of the many boxes containing numerous tapes from the past with a 25 songs long rehearsal for the "Inhale/Exhale" session. I wrote about it then but it's not until now it has been publicly available.
Unfortunately the tape is not marked with a date, but I would estimate that it was recorded during the late summer or early autumn of 1997. What I do know is that this is the first of two "in studio rehearsals" that we made, and the second one is yet to be found at this time.

So, this was recorded in the first version of Soundlab Studios. We had no proper rehearsal place and my drums were used as the house kit in the studio so every now and then Mieszko and I got together in the small drum booth and rehearsed. Kind of a weird situation, but it worked. We got an album done... And, since the drums were in use during the days they often had mikes on them when we rehearsed with obviously gave us a real good possibility to record a rehearsal though the mixing console getting a proper sound. (But as it's a 20+ years old tape there are some glitches occationally...)

This rehearsal has a particular "early Soundlab sound", perhaps more in line with our sound on the Regressive Hostility compilation session than on "Inhale/Exhale", but as explained above it is an "in studio rehearsal".

All right, this session has a number of "Inhale/Exhale" songs and it also have a few unused songs. In this blog entry I wrote that we recorded a total of 46 songs for "Inhale/Exhale" including the four cover songs for the bonus 7" EP and four songs that were omitted from the album due to different reasons, four songs called "Truth Fed Through a Tube", "Need some...", "Dark Thoughts" and "Crash". Rehearsal versions of the last two are in this session and "Need some..." might be one of two songs (or not at at all) and "Truth Fed Through a Tube" is most definitively NOT in this session as I have a clear recollection of a certain part of the song.

I written a few comments for some of the songs, all of the unused and untitled songs of course, and also for a few songs that needed some comments for other reasons.

This unused song has a intro that reminds me of the stuff we did on the "World In Turmoil"/"The Black Illusions" session a few years prior to "Inhale/Exhale". That groove stuff, although played a bit sloppy here. I don't know what happened to this song. It might have been the one called "Need some..." during the album session, but I can't say for sure. I think it's quite cool. I like the tempo changes and the strange ending. This should have been recorded for real!

#7: TOO NAKED TO DISTORT

Most of the album songs from this rehearsal are basically exactly as they ended up on the album when it comes to riffs and arrangements. This is the only exception. This version has an alternative chorus riff that is very similar to what's on the album, but still it's not the final version.

I would say to 99% that this is the song recorded as "Crash" during the actual album session which was one of the four songs that never made it to the album. It has a quite epic intro and a quite busy riff towards the second half of the song first played with a rhythmic beat and then with a fast two-beat. I think it's a pretty cool song and hope to find the actual studio recording today to figure out why it was left out from the album.

If my memory serves me right these two songs were possible the very first written of the album songs. I remember rehearsing them with our dear friend Jallo Lehto (Krigshot and so much more...) playing the drums. After Rickard left the band and before I started playing the drums in Nasum we tried Jallo during a rehearsal, but he wasn't a grindcore drummer. But that would also mean that the songs pre-dates the "World In Turmoil"/"The Black Illusions" AND the Regressive Hostility sessions... Are they really THAT old? Anyway, these songs were almost always played together like on this rehearsal, but for some reason we split them up on the album tracklist.

This is a very weird song for being from the "Inhale/Exhale" era. What's weird about it is that when we wrote it (and recorded it during this rehearsal session) we were dead set on the idea that it should be the opening track of the album. But ultimately it was totally canned, not re-worked in any way - just canned. In retrospect this perplexes me. How could we go from "THIS IS THE OPENING TRACK!!!" to "Fuck it, let's kill the song"? The performance in this rehearsal is sketchy and that might have been one of the reasons for it's demise: The song was too hard for us at that time, but still...

This song sounds very much like a typical "Inhale/Exhale" song! It's possible that this was the song called "Need some..." during the album session, but again I can't say for sure. Again, this is a pretty cool song although the verse riff has a slight annoying feel. That might be what killed it. But today I could easy see this as a "Inhale/Exhale" song.

One of the four, for sure, and also the only one I have the studioversion of at hand (as mentioned in the "Grind Finale" liner notes). This song was canned from the album due to really bad lyrics (on the subject of suicide), but perhaps also because of the music. I decided to keep a "take 0" version of the song where Mieszko had trouble getting the intro-riff right. I thought that was amusing, because he's not nailing it in the actual full song rehearsal either! I wrote the song and can still play the riff. It's in 5/4 so that's why it fucks with Mieszko's brain, I guess.