In May I did a little recording with my new band Axis of Despair, and we did it in Soundlab Studios. The studio still exists and bands record there every now and then, but not as frequently as in the old days. While in the studio I flipped through the old guestbooks where the visiting bands wrote and drew shit while killing time in the studio. As did Nasum, and on the last day of the recording I brought a scanner to make digital copies of the Nasum pages in the books.

There were ten entries in the books, from the first real recording in Soundlab (the "Regressive Hostility" compilation tracks) to the final one ("Shift", obviously). Here you have them with some additional comments. Click on the images for larger versions. 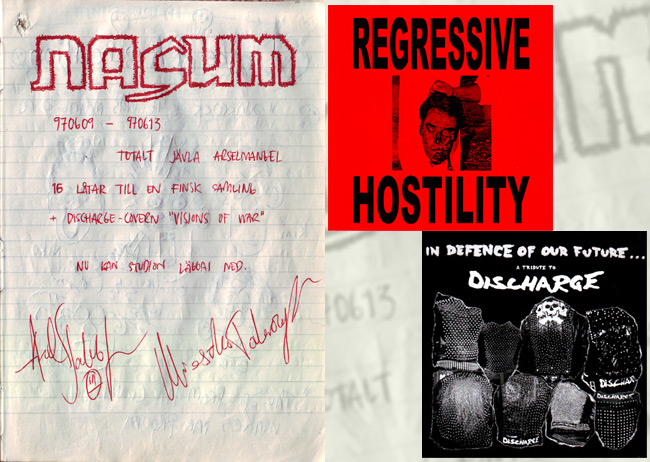 This recording was primarily done for the "Regressive Hostility" compilation and we recorded 16 tracks for it plus a Discharge cover for a tribute album. That's basically what's written on the page. It's pretty clean for a guestbook entry, and obviously I spent quite a long time drawing the Nasum logo as precise as possible.

Oh yeah, it's the mighty "Inhale/Exhale" session! It was done on real tapes and the lengthy entry is actually a list of the three tapes it took to make the recording. The die hard fans can notice one thing - or actually four things as there are a couple of songs not featured on the album in the list. Track 13: "Truth Fed Through a Tube", track 25 "Need some…", track 27 "Dark Thoughts" and finally track 36 "Crash".

If you have read the lengthy liner-notes to "Grind Finale" you might remember that I couldn't find copies of these tracks in time for the production of the compilation, apart for one song, which I opted to exclude mostly because it sucks, but also as I felt it was incomplete without the other three. The song I found was "Dark Thoughts". I have slight memories of "Truth Fed Through a Tube" and "Crash" and no memory at all of "Need Some…". It's been well over 15 years since I heard those songs, but I am still looking for them. If I ever find them, I will make them public, even if they suck...

Yet again, these pages are pretty clean and with a good rendition of the logo... 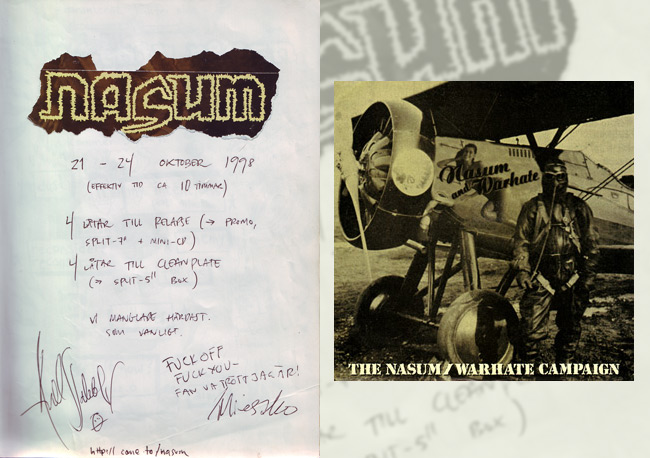 A "ten hour session", according to the page, where we recorded eight tracks. Four that we sent to Relapse for multiple uses (in the end they became the split 7" with Warhate) and four that were supposed to end up on a very exciting split 5" box set that never happened. Read the "Grind Finale" liner-notes for the whole story.

Pretty clean page this time as well, and the logo came from a promo sheet or poster for "Inhale/Exhale". Notice the old shortcut URL come.to/nasum... 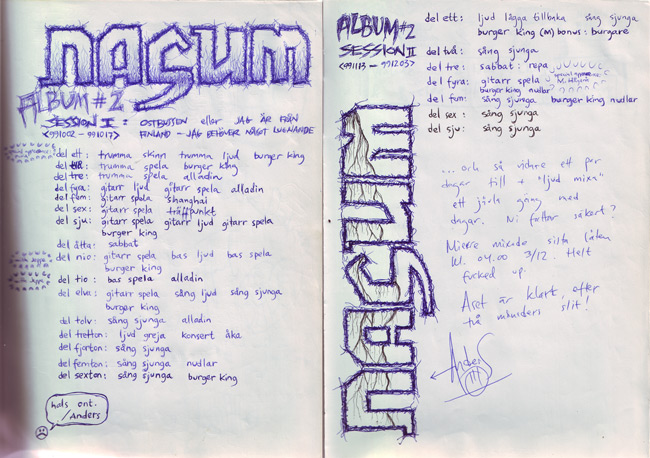 The "Human 2.0" recording was divided into two two-week sessions and about a month between the sessions. The idea was an attempt to avoid destroying our voices, which didn't really work that well. The little word balloon in the lower left corner says that my throat hurts.

This is a weird entry. In a quite short form and with a Yodaesque language, it reports what we did and where we ate (!) each day. All righty, then… On day 13 we "show went", which meant we went to a show, and if I remember things correctly it was a Neurosis/Today Is The Day show in Stockholm. Imagine that.

According to the first page, Jesper recorded his bass tracks in just two days. That's good. 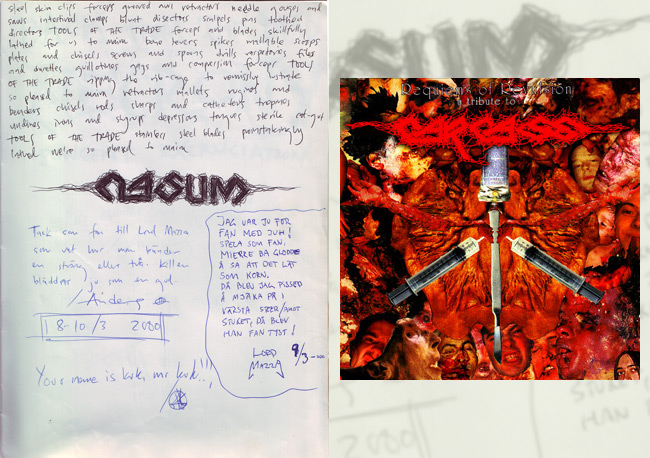 This is the only recording session in the history of the band where we went into the studio solely to recording one song. It was a Carcass cover for the "Requiems of Revulsion" tribute. We recorded "Tools of the Trade" with the almighty Lord Mazza (ex The Project Hate) supplying a Bill Steer-ish quitar solo.

Most of the page is covered by the actual lyrics to the song and the logo was obviously made just for this page… Perhaps it should have been a t-shirt design? 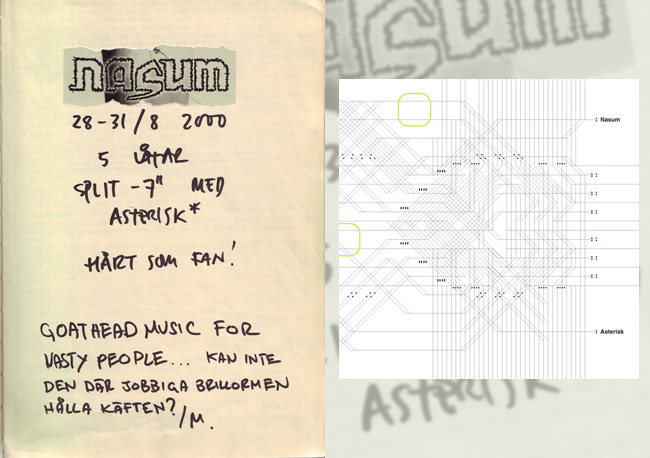 This was the recording for the Asterisk* split 7". Another quite clean page and this time a "Human 2.0" sticker was sacrificed to supply the logo. 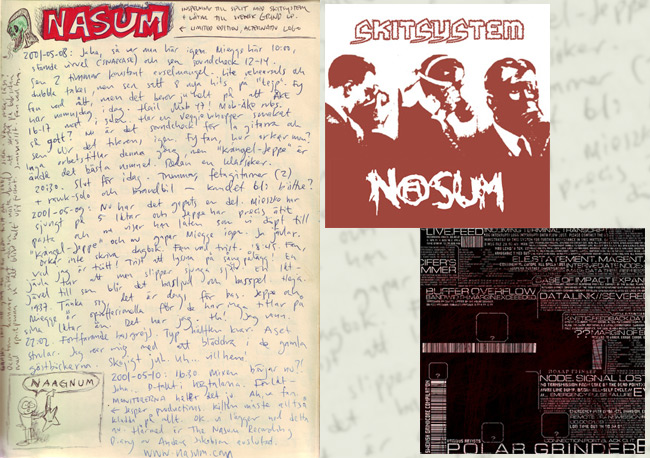 The by far messiest page we did. It's quite embarrassing to read this. I tried to write something in the same style as many other bands who wrote funny journals about their recordings. This isn't really that funny, and today it just feels like a poor attempt to be cool. One funny thing is that a working title called "Krångel-Jeppe" is mentioned in the text, which most likely is referring to the Jesper written "X Marks the Spot" on the split 7" with Skitsystem, as it's that recording session. And "Krångel-Jeppe" himself drew the little guitar player saying "Naagnum" (a call back to a poster in Spain on the tour with Napalm Death back in 2000)... 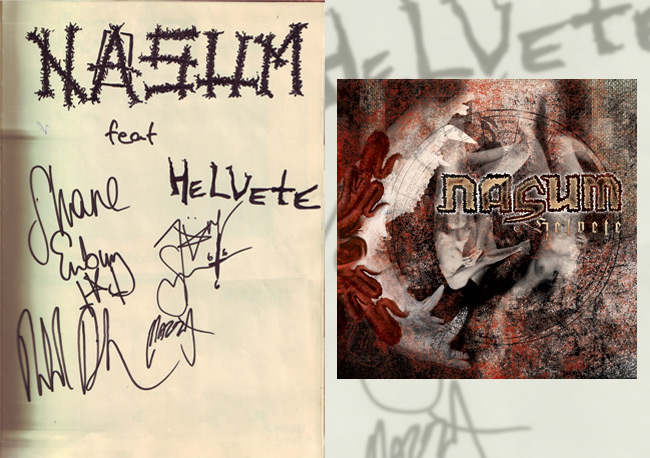 I believe I did the Napalm Death-ish logo, but that's my only contribution to the page for the "Helvete" session. The other stuff is the signatures from all the guests, Shane Embury, Jörgen Sandström, Rickard Alriksson and Mazza once again. Cool stuff! 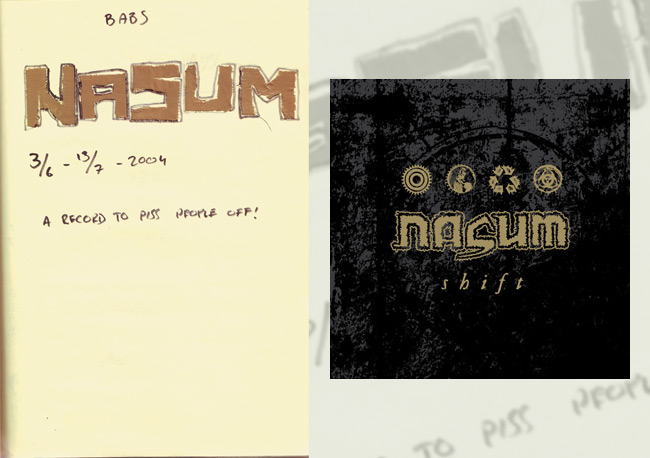 As a sad ending to this story, the entry for the "Shift" session is quite sad in it's own way. I made the tape logo during the first days of the recording and then never wrote anything on the page. Mieszko wrote "A record to piss people off!", which it did when we switched record labels. The boss' name is on top of the page.

Before posting this I remembered that the old Unisound guestbooks were featured on unisound.se and in the "brown" one I found one Nasum page. It's not dated but by viewing the pages before and after this entry it's pretty clear that it was made during the "Smile when you're dead"/"Grindwork" session. 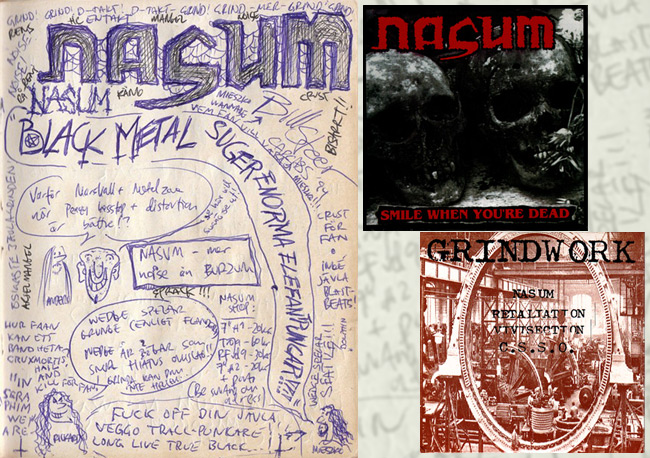 Not much to say, a pretty messy page, from a time when we had long hair and beards. Mieszko has written some anti-black metal remarks, and Rickard obviously had some issues with the band namn Crux Mortis, while I promoted my amp setup (yes, this was from before my drumming phase) - a Peavey bass amp and a Boss DS-1...

And by that, this little excursion in the vault is over!

Previous posting:
A tale about Corpse, Flesh and Genitals
Next posting:
Among the tapes of the past