On the very first Nasum recording, ”Blind World” - the split 7” EP with Agathocles, I wrote some lyrics to a song Rickard wrote. It was ”Scarecrows”, in which I described stale politicians as scarecrows ”on a field”. A few recordings later I wrote ”Black Visions” for the ”Smile When You’re Dead” split 7” EP with Psycho and yet again I used scarecrows as a description for politicians not doing anything. So the song got the parenthesis title ”(Scarecrows II”).

Then, yet another few recordings down the line, I concluded the trilogy with "The Final Confrontation (Scarecrows III)” on the ”World In Turmoil” 7” EP. I don’t know why this theme didn’t continue on further recordings (although that type of ignorant politician described as scarecrows certainly figured in numerous lyrics during the years), but now many years later ”Scarecrows IV” is here - as a t-shirt. 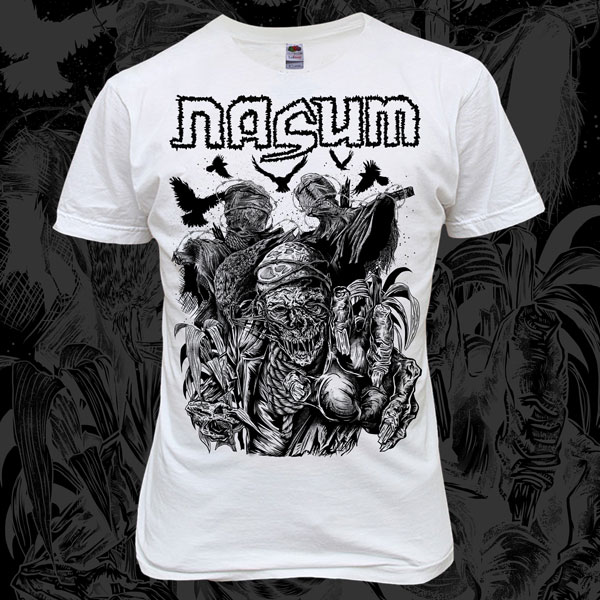 I was contacted by Darius Alas, an artist in Estonia who wanted to do a t-shirt design and when we started discussing ideas I re-read some old lyrics to see if there was something to work from and got stuck on ”Like scarecrows on a field, you stand stale and quite” - the chorus from the original ”Scarecrows”. That felt Nasumish and easy to work with from an artistic point of view.

So Darius got cracking and after a couple of weeks the design was finished and is now available from Selfmadegod Records. It’s a great design and doing a white t-shirt for a change felt really good and fitting for the design. Thanks a lot for your work, Darius!

Check out his design studio Midiankai Arts at Facebook.