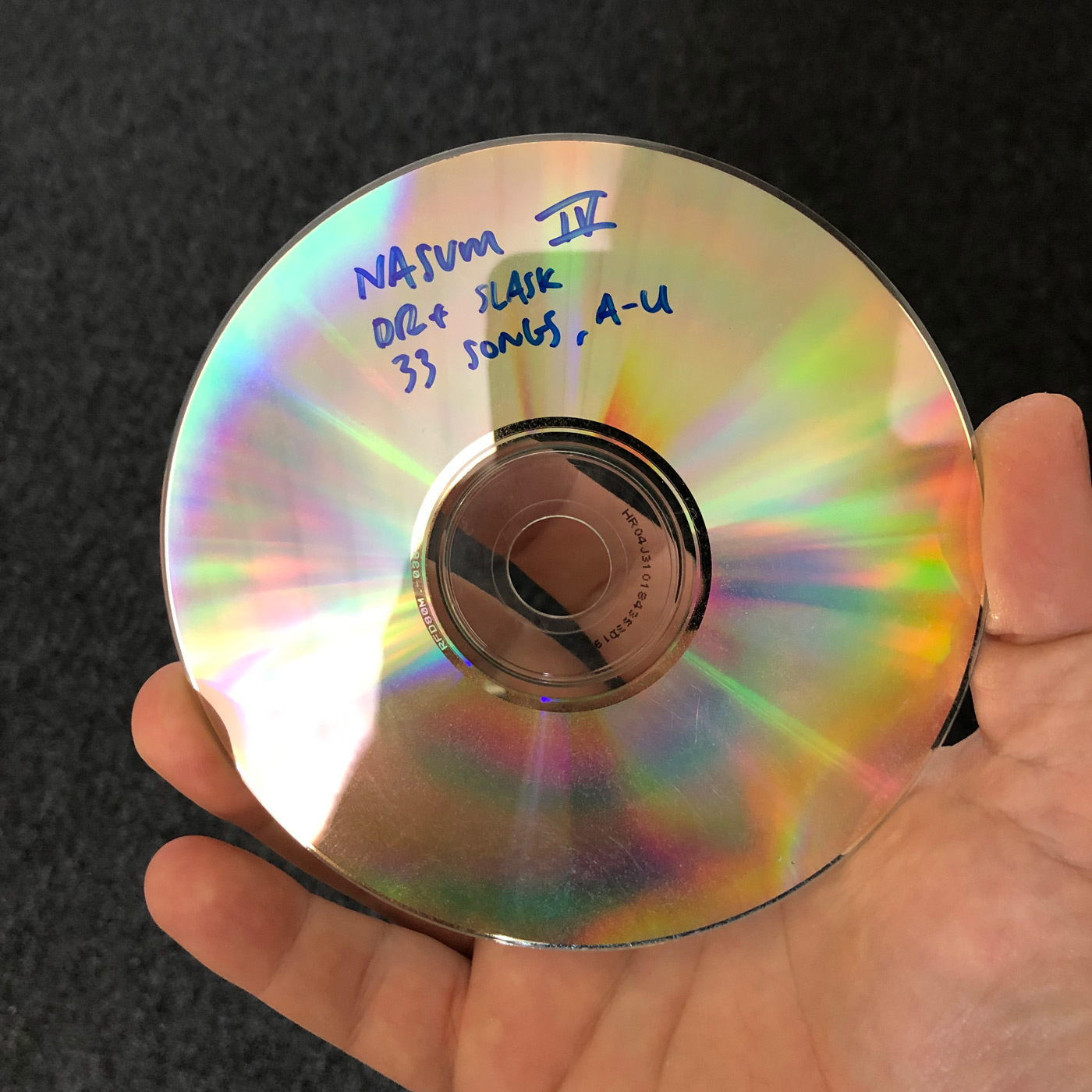 NOTES ON A RECORDING

Like many of my latest findings for the Nasum Vault, I came across this very randomly. I was going through some boxes and found a collection of burnt CD's and DVD's, some with proper notes, other without. This had some writing on it and I could easily identify what "NASUM IV, DR + SLASK, 33 SONGS, A-U" meant: 33 songs, sorted by working title from A to U with the drums and the "slaskgitarr" (scratch guitar) from Nasum’s fourth album session!

I might be Mr Obvious here, but there are many ways to do a recording session. One way that is very common is to record the drums with a scratch guitar or a support guitar, because that’s really what it is - a roughly recorded guitar track that supports the drummer through the songs so that every break and pause gets the right timing. Sometimes the guitar plays a simplified version of the riff just to make it easier for the drummer. Most of the Nasum album recordings were done this way.

I probably have tapes with all of the album sessions with drums and scratch guitar somewhere, but this it most likely the only CD. The reason why I have it is of course to be able to listen to my drum takes at home to find out if something needed to be re-recorded or changed in some way. Sometimes when you spend hours in the studio, you can't really hear things properly, so that's why it's nice to have a listen at home.

I guess I should have reacted to the number 33 on the CD because the actual album has 24 songs, the Japanese version has two more and there are an additional four songs from the session on "Grind Finale". 24 + 2 + 4 = 30. So what's going on here? Well, there are three unfinished and unused songs on the CD! I was quite surprised to realize that, especially since I had totally forgotten about two of them!

From the 33 songs I have selected only 10 for the "Shift: Drums and Scratch" digital album. Mainly because this mix is very drums dominant and some songs aren't really that interesting to hear this way (not even for me), so I have chosen a few tracks that are interesting drumwise or in some other way worth hearing in this format. I am quite fond of the drum sound that is very organic and cool.

Here are some comments to the 10 selected tracks. I realize that in some cases I have written basically the same comment as I did in the Track by track commentaries to "Shift", but unless you have that fresh in mind, this should be worth reading...

The only track that wasn't written before the studio session, but actually during it. Between some takes, Mieszko fooled around with the Bolt Thrower'ish heavy riff that is featured in this song and said "I want a song that sounds like this!" and I said "Well, I am going to the bathroom, write the song!". And that's basically what happened. But this version is not how it sounds on the album. The blast parts in the beginning has a temp riff that was rewritten properly later and then the song ends after the Bolt Thrower part. The version on the album has an atmospheric part following this riff and the Bolt Thrower part again. That was created in time for the proper guitar takes. The Bolt Thrower part was copied and pasted and the atmospheric part was recorded with less microphones on the drums, as they had been dismantled. I remember this being quite inspiring and something that we planned to do more in the future...

This is one of those songs that I really would have liked to have played live. It never made it into the set. It’s one of those great non-grind songs Mieszko wrote that sort of expanded the Nasum sound. On the album the song feels quite processed and produced (in a good way) but I like this raw feeling. I like how the drums were allowed to “breathe” in the over all sound, which is even more evident in this form.

Most people know the story about this fan favorite. It was originally recorded for "Helvete" but the version felt slow and was excluded from the final  tracklist. We decided to re-visit it for "Shift" but played it faster and added more aggressive drive to the arrangement. For instance the second half is much angrier on the "Shift" version but Mieszko also re-wrote the verse riff to have more power and drive.  During the scratch recording process the riff was still the old slow and slidy riff, which makes this version the perfect mix between the "Helvete" and "Shift" versions!

I imagine that every musician would like their stuff to be heard properly, but since music is a result of layered instruments it might be hard to be really heard. In a good mix you will obviously hear every instrument clearly even if they are layered but still, you might want some more. What’s my point? Well, I am happy this drum dominated mix exists, because I am happy about all aspects of “Hets”, perhaps in particular the drumming.  This was a fun song to write and record.

"I Hate People" is obviously a great track from "Helvete". At some point we started playing the song really slow and heavy on soundchecks and it birthed the idea of recording a slow version of it. I believe I used to call it "I Hate People (Slowly)" which is a reference to Napalm Death's "Twist The Knife (Slowly)" but I also remember that we called it "I Hate Slow People"... Anyway, this version is pretty cool, but I remember that we weren't really satisfied with everything. What ultimately killed it was when Mieszko was about to record the vocals. Then it became too much of a nu metal song with the slow vocals. That means that there probably is a version somewhere with properly recorded guitars for the song... Hm...

The opening of this song in this particular version sounds like total chaos, which is great in its own way, but it's probably the rest of the song with its playful arrangement with alternating time signatures and such, that ultimately gave it a place in this selection. I had a lot of fun writing and recording this song and I was happy that it made its way into the live shows supporting "Shift" and on the Farewell tour of 2012. And the title pun is pretty good too!

This is a song that never got finished, probably for some good reasons. I would say that I am quite sure this was written by Mieszko. I do not have any real recollection of this song and I can hear that it's played slightly sloppy, so I am not surprised that it never got finished. It has a weird and aggressive thrash ending that was quite funny and unexpected. Never the less it would be fun to actually hear how this song could have been today.

Between "Helvete" and "Shift", Nasum had gone from a three piece with Jesper  to a quartet with Jon and Urban as the other members besides Mieszko and I. Unfortunately, that made Nasum a band of two cites, Örebro and Stockholm, and we couldn't rehearse with the full band as often as needed. So we made the decision that about half the songs would be rehearsed and recorded by just Mieszko and I. "Deleted Scenes" was a full band song and I always loved rehearsing it when Jon and Urban came to Örebro.

Another unfinished song from the session. It took a few listens but I am 100 percent sure that I wrote it. Too bad that the riffs and inaudible but I have slight memories of it being quite inspired by His Hero Is Gone/Tragedy so it probably had some harmonic shit going on in the riffs. Anyway, it was perhaps one of those songs that would have needed some more work before it was brought into the studio, but as with "Unfinished #1", it would be fun to hear the imaginary finished version...

This one was called “symmetric” during the rehearsal process as it has an A-B-C-B-A arrangement that for one thing made it very easy to remember. The “C” part is a great part where I could go bananas on the drums. It was always fun to try to find the perfect improvised round for this part and I am pretty happy with the one that ended up on the album. Another example of doing part of the writing process in the studio. 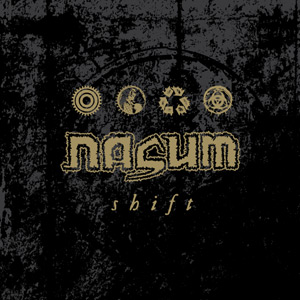