• It will probably be released in April by FETO, with distribution by Cargo.
• There will be 1000 copies made.
• It will most likely be called "SOS Japan - Grind Kaijyu Attack!"
• Napalm Death has some killer artwork on their side...

...and so does Nasum. Below is a preview of the artwork for Nasum's side of the 12". I contacted Jonathan Canady, who did the booklet layout for "Grind Finale", and together we developed an old idea about a Godzilla type of monster (obviously now dubbed "Grindzilla"...) going bonkers in a city. As Jonathan decided to ink the artwork in the old "Scum"/"Mentally Murdered" style it was pretty obvious that the buildings he destroyed were the corporate buildings of the same MNC's as on "Scum". Just a little nod to the guys on the other side of the picture disc... 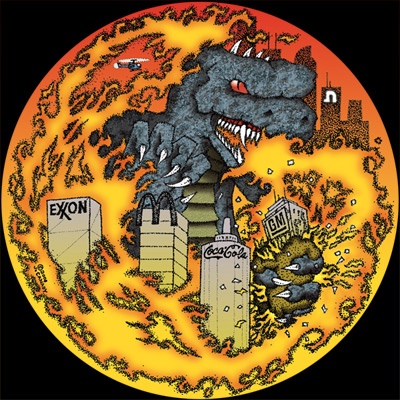 More info like pre-orders and such will come closer to the release.