Newspost • Posted: January 10, 2008 23:25:38 by Anders Jakobson
So how about this - there will be a new Nasum album in 2008! Yes, a final album and then nothing more. It's the live recording from Japan 2004 that has been in the archives for quite a while (first mentioned in this blog (look in the archives for more info)).

It's a little bit confusing but I'll try to explain everything as clear as possible:

First, there will be a split with Napalm Death, a limited edition picture disc released by FETO very soon... Can't really be specific about the release date at this point.

Then, the Nasum side of the split will be a stand alone CD called "Doombringer" on Relapse. This is a digipack release that apart from the 16 songs also will include Mitch Harris video for "Scoop" and liner notes by me. The album will be released March 4th and can be pre-ordered from Relapse now.

There might be an LP version of "Doombringer" aswell, I have at least OK'ed the artwork for the LP. 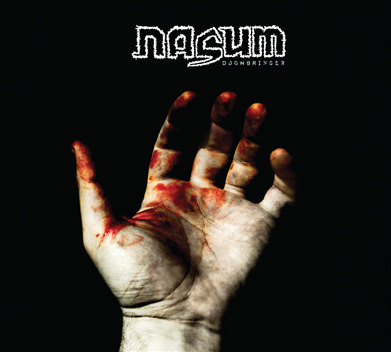 More info about the split and "Doombringer" coming up, but here's the tracklist: