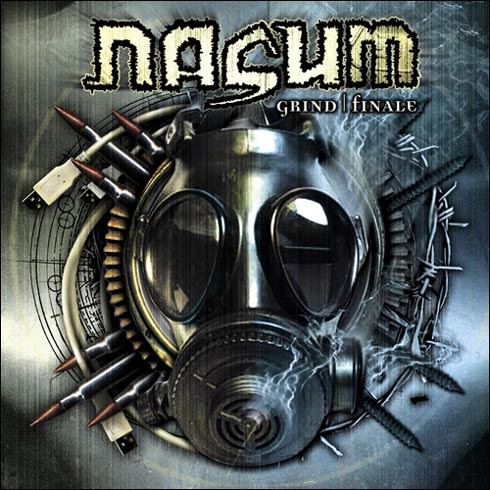 This past week the artwork and booklet design for the last (?) Nasum release, the collection “Grind Finale” was finalized and sent to the printer. Now I finally can give you a preview of the front cover for this release.

The cover has been made by Relapse’s art department - Orion Landau did the front cover and disc design and Jonathan Canady did the booklet design. I’ve worked very closely with these guys and the result is quite stunning if you ask me. I am totally satisfied with everything.

One of the most important things about the collection has been the packaging. I wanted this release to be something special, something that made it worth buying instead of downloading, which sadly has been the option for many people these days. Not surprising Relapse shared this idea and worked with me to find the ultimate package.

We decided to do the same kind of CD package as Tool used for their “Salival” release a couple of years ago. The package has hard covers with the two discs on the insides and between the covers an 80 (!) page booklet with liner notes, lyrics and lots of photos and artwork, some previously not seen before. I guarantee that “Grind Finale” will be worth the money it costs!
(Note that we will not have the traycase and plastic box that “Salival” has!)

The release dates are as follows:
USA: October 25th
Europe: October 31st
Japan: November (the Japanese edition will not include any bonusstuff!)

So it’s roughly two months left until “Grind Finale” is released. Remember that you can download 21 samples from the compilation at the audio/video page and read more about “Grind Finale” in this statement and in this detailed information.

I’ve uploaded a complete show from the European tour 2004 to the audio/video page. I got a VCD from the show in München, Germany November 11 and it’s now available for download. Unfortunately Dr Div X failed to compress the file keeping the sync so I offer you the original VCD file (MPEG) and a smaller Windows Media file instead. Check it out, it’s a pretty good show. We played fucking fast this evening!