Six months since the Tsunami 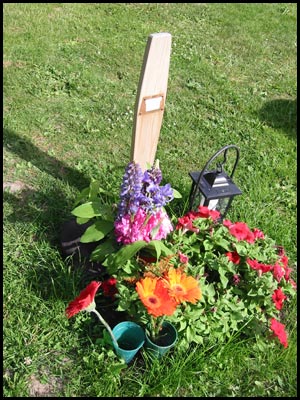 Today it's six months since the Tsunami took Mieszko's life in Thailand. I went to the grave together with my girlfriend and our friend Jimmy who once played in a band with Mieszko and who has been our merch guy on several shows in Sweden. We brought the two orange sunflowerish flowers you see at the bottom of the picture.

Last time I visited the grave I found a baseball hat of the type that Mieszko had by the grave. I though it was one of his old one's that the family had put there but today Jimmy told me that it was he who put that hat there. Apperently Jimmy had asked a store if they had any all black hats and they had ordered some, but when Jimmy went there to buy one the storeowner said that Mieszko had bought all eight hats that had arrived! But the owner found another hat and it's that hat that is beside Mieszko's grave today.

Lately, people have asked me about some kind of memorial merchandise and I'm working on something. I have a design for a shirt that I want to show the other Nasumers before deciding what to do. I personally think the design is quite good and appropiate.

And speaking about merchandise there will be something to order soon... Any day now... And I guess I'll do something new (re-prints) after the summer, or at least after July since the print firm is closed during the summer.

Until then think about Mieszko and his family today and if you haven't seen the memorial page yet, go there now.